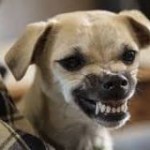 Any dog can bite. Many of us don’t think that to be true, but it’s something we should always keep in the back of our minds. Even the most well-behaved, nicest of dogs has a mouth full of teeth it’s prepared to defend itself with if need be. There are many common (and not so common) sense measures that can be followed to avoid a dog bite.

Statistically speaking, children tend to encounter more dog bites than most adults alongside senior citizens and postal workers (no surprise with the latter I’m sure). Teaching kids the proper way to approach or avoid a dog may save them from being part of that statistic. It’s never wise to startle a sleeping dog or bother one who is eating, caring for their young, or chewing on a toy or bone. Never put your face in a dog’s face. If a child (or an adult) stumbles upon an off-leash dog, avoid the instinct to run. Stand still and avoid eye contact. Never pet or approach an unfamiliar dog unless the owner gives permission. Even in those cases, be wary, as not all dog owners are savvy to the signs of a stressed, scared, or aggressive pooch.

Many people believe a pup is always happy if they’re wagging their tail. Though a lot of times that is the case, there are other “emotions” that can be displayed by a wagging tail. An aggressive dog will likely try to make themselves look larger. They often have a stiffened posture with their tail straight up and sometimes wagging. These dogs tend to stare directly at their assumed threat and you will likely see their fur puffed out in some places. More obvious signs would be growling, lunging, and baring those pearly whites. Quite the opposite are signs of a nervous or frightened dog. They typically try to appear smaller by crouching, putting their head down, and tucking their tail between their legs. Some will even roll on their back exposing their belly. An anxious dog will likely also avoid eye contact and try to getaway. If unable to avoid their perceived threat, a scared dog can bite too. We often refer to these animals as “fear biters”. It’s not always cut and dry when it comes to a dog’s behavior. There are often contradictory actions that one could assume to mean one thing, but in turn, does not (like wagging tails and rolling on backs to expose bellies.) Dogs also can display more than one behavior at a time if they’re unsure.

Believe it or not, a majority of bite incidents are from a known dog. Even your own dog could be a biter in the right circumstance. It’s hard to think that way of your own sweet fur babies, but it is always a possibility. When you bring your dog to the veterinarian or groomer and are asked if it’s ok for your dog to be muzzled, please know that it is because the staff is trained to spot the little behaviors in dogs that you may not see or know and our goal is to keep you, your pet, and ourselves safe throughout their visit